It has been a long four months, but I'm almost there!  My last 20-mile run is tomorrow morning, and then the "taper" begins.  I'm feeling pretty good, up to around 40 miles a week at this point, and am anxiously excited to run Eugene on Mother's Day.  I hope the weather will be as great as this weekend, 50s and sunny at 7am.

I ran one 20-miler two weeks ago, and felt good and not even that sore the day after.  My pace was around 10:30 per mile, and if anything, my body was just tired from not having the proper replenisher needed in those late miles (I brought Nuun with me but finished it and was just drinking water for miles 14-20).  But overall, my body feels ready to take on this last 20-miler tomorrow!

I usually run in the afternoon, but I wanted to make sure to throw at least one morning long run into my training schedule to simulate what it will be like on race day.  The key for me is making sure I hydrate enough the night before a morning run (which could be difficult with a Friday beer during the Winterhawks playoff game today, I'll have to limit myself to just one!!)

Happy Friday.
Posted by Unknown at 3:41 PM No comments: 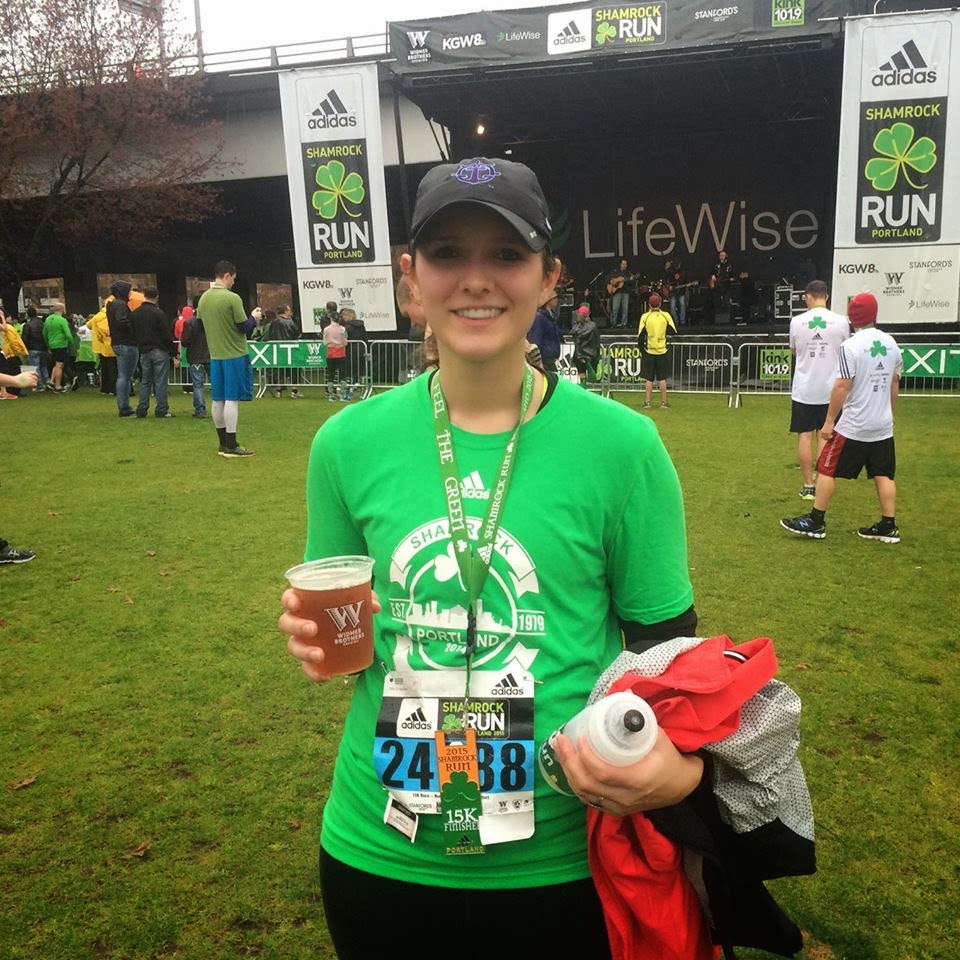 The Shamrock Run 15K in downtown Portland was a wet, challengingly-fun race.  My race started at 7:30am, and a pouring rain just began to let up as we approached the start line.  Bryce and I parked my car downtown and walked toward the start, donning a rain jacket to keep myself dry as long as possible before the race began.

I ran the 8K last year, which follows a similar start, on Naito Parkway and SW Broadway.  The rest of the course, however, was new to me.  The start was a bit soggy, dodging puddles and trying to keep my feet as dry as possible for as long as possible.  It was a flat, fast beginning 2 miles, and the Broadway hill started to kick things up.  The hill on Broadway lasted just about a mile, with a steady climb, enough to slow me down to about a 9:30 pace.  There were a lot of spectators on Broadway, which was nice and encouraging.

Once we passed PSU, we started to run towards Terwilliger, and then the real hills started.  Terwilliger Boulevard is a scenic thoroughfare, very windy with a steady incline.  There would be a hill, it would flatten out, and then another hill, etc. etc.  This was by far the toughest climb I've had in a race, rivaling the hill at mile 10 in the Presidio during the Nike Women's Half.  I kept telling myself that I would stop if I had to at the next hill, but whenever I reached that "next hill," I kept moving.  Slowly, but still running.  It was really tough, but it was beautiful.  The rain turned more mist-like and we were high enough up that we ascended into the layers of fog that settle on the tops of the hills in SW Portland.  I definitely plan to train on this road soon, as I noticed there was sidewalk most of the way.

Even with half of a marathon training plan under my belt, it never felt better to have reached the top of the road and turn onto Barbur Blvd.  There was a small cheering section at the end of the hills that gave me the motivation to "bust it out" for the last few miles.  It was all downhill from there!

For the last 3 miles, I kicked it into a 8:45-9 min per mile pace.  I really opened up my stride and focused on the finish.  The slight downhill incline tested my knees but felt great overall.  I sprinted the last .25 mile to the finish back on Naito Blvd. and met up with Bryce to celebrate!  My time was 1:29:27, which is around what I'd expected.

I was handed my finisher medal (a neat bottle opener!) just after the finish line, and then Bryce and I headed to the finish area.  Each runner's bib came with a tear-off coupon for a little shooter of Stanford's salmon chowder, and the warmth was just what I needed after a soggy race!  Then we headed to the Widmer tent where my bib also got me one free pint of IPA.  No better way to end a St. Patrick's Day race than with beer!

Overall, I found the course, organization, finish area, etc. very pleasing.  I would love to do this challenge again next year and break my PR.  I can only hope for better weather next year, third time's a charm!
Posted by Unknown at 9:56 AM No comments:

The Day Before Shamrock! 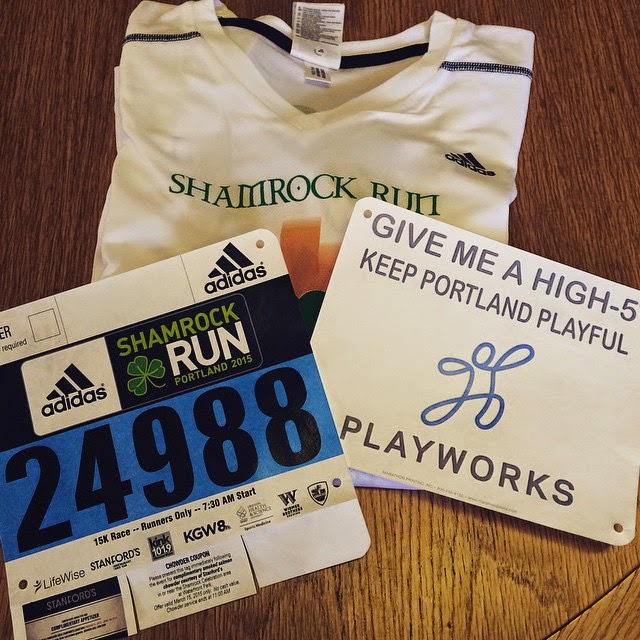 The Shamrock 15K is looming!!  And unfortunately the weather won't be nearly as nice as it was last weekend.  But what can I say, it wouldn't be a Portland race without a little mist ;-)

I'm very excited to try the 15K course this year (last year I ran the 8K, which was fun and short, my first official race ever!).  The 15K is called a "challenge," because of the constant uphill in the first half of the race.  If you know Portland at all, it runs up SW Broadway, past PSU, and keeps going up SW Terwilliger.  I've heard it's beautiful, and I'm so excited.

I got out there for a little short 2-mile warmup just now, and feel pretty loose.  On Thursday, I picked up my race packet at Oregon Public House, which is a cool "non-profit" pub that selects different charitable organizations to donate portions of proceeds from meals to each month or so.  The chicken curry was fantastic, as is the "Super Team" I'm running Shamrock for:  Playworks!  Playworks is an organization that "believes in the power of play to bring out the best in every kid," and they work to organize recess and activities in elementary schools throughout the nation, this chapter specifically in the Portland metro area and SW Washington.  They help kids stay active as well as learning conflict resolution, creativity, teamwork, and all of those necessary life skills that are so important for childhood development.  I'm excited to support such a wonderful organization!

Yesterday and today was the Shamrock Run Fitness Fair, and I worked a booth to promote the Oregon Wine Country Half Marathon that is August 8th this year!  I managed to take a lap to see what kind of vendors were around, bought myself a couple more packs of Nuun replenisher and a couple of super cute glittery adjustable Yankees headbands.

Tomorrow I will most likely opt for a dri-fit long sleeve, and possibly a green tee over top to be "festive."  (Last year I ran in all black and was shamed.  Just kidding.)  I'll also wear a hat instead of a rain jacket, because I'll be running at race pace, a rain jacket may be just a bit too warm for those hills.  I hope I can maintain a fast 9:15 pace per mile, but I may be too optimistic.  The hills will be tough, and I have been working more on distance (training for marathon) than on speed as of late.

That said, I am looking forward to the music, people cheering me on, and the delicious Widmer beer and Stanford's salmon chowder at the finish!  See you there, Portland.
Posted by Unknown at 5:34 PM No comments:

I've nearly reached the halfway point in my training program!!  This past week, I ran a total of 40 miles, including a 16-mile long run on Saturday.  It was almost 70 degrees and sunny, and I went on another running adventure by running a route I had yet to do:  the I205 pedestrian path and Marine Drive.  It was a picture-perfect run on the Columbia River as the sun was setting.

My body felt great, with my legs pretty sore running back to Washington, as the I205 bridge is uphill.  I unfortunately ran out of Nuun replenisher at mile 12, and was starting to dehydrate.  I had to alternate walking and running the last two miles, but my legs felt relatively good.  I need to either scout water fountains before running a route, or plan to bring two bottles from now on.

The Shamrock Run 15K is this Sunday, and I'm looking forward to the challenging course (and of course, the beer and salmon chowder at the finish).
Posted by Unknown at 12:31 PM No comments:

I had quite a good personal record going for days not being sick.  I think I was up to about 7 months.  I came down with a cold last week, which may have had something to do with marathon training.  My body is not quite used to all of these miles, and I also have a track record of being sick the first week in March for about 10 years running.

I have been giving my body time to rest and recover, but I'm getting antsy to do another long run!  I had to postpone Saturday's 15 miler until today (Monday), and we will see if I make it that far when I head out after work today.

Keys to recovering from illness:  rest and hydrate!!
Posted by Unknown at 1:21 PM No comments:

So I've been training for the Eugene Marathon, and a couple weeks ago, I went for a regular 3-mile run, and woke up the next day with pretty bad foot pain. It was sudden and unexpected, so I gave it rest, ice, etc. and the less activity on it, the better it would feel.  I began to expect that my running shoes were beginning to wear thin.

I tried a few more painful attempts at running, and in a last ditch effort before calling the doctor, went to the Nike Employee Store to get some new kicks, a pair of my usual Nike Frees and a pair with a little more support.  I ended up getting a pair of Nike Air Zoom Pegasus, which when I tried on at the store felt great.  They also came in a wide size, and although I have wide feet, often can't find quality running shoes in Wide sizes, and so my feet end up suffering.

Those did exactly the trick.  The bit of extra support and cushion, and extra width, immediately relieved my foot pain.  I went for a short 3-mile run in downtown Portland that day and felt as if I was running on clouds!  It's amazing how a tiny little issue can throw off an entire routine.

I took it easy for the weekend, doing a 6-mile tempo run on Thursday and a reeeeaally easy 14-mile run on Saturday.  The time I took resting my foot definitely set back my endurance a tiny bit, but not much.  I didn't feel fatigued until around mile 12.

I hope this week will continue to show improvement!
Posted by Unknown at 12:34 PM No comments: